Classical Conversations is a classical education method with a biblical standpoint. I had the opportunity to review one of their handwriting notebooks:

PreScripts Cursive Words and Drawing
$12.99
This notebook is geared towards 5-10 year olds. Classical Conversations also provide materials for children as young as age 3 up through high school.

I had attempted to introduce the concept of cursive to my oldest son when he was four. Is that crazy?  I may have been a little over zealous but we only made it through a little over half of the alphabet when I realized I should probably focus on perfecting his letters in standard print first. Interestingly enough, we are STILL working on this two years in the running! Even so, he still remembers the early days of cursive and often times asks for a cursive worksheet to work on, just for fun! When I saw this particular workbook I knew that I wouldn't be pulling teeth for this one!

When I received it in the mail and opened it I was glad that I had already taught my son the basics and foundations of cursive writing because even though this is geared towards young writers, I found it challenging. Fortunately, my son is up for the challenge! The way the book is set up is there is enough work to do 4 or 5 pages a week for an entire school year. I was happy to read that younger children might find it easier to do half a page a day. That is exactly what my son did! Except for the first lesson... The first two pages have the entire alphabet in cursive allowing the student to get a feel for each letter. 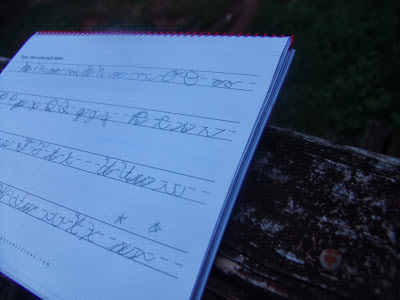 My son was excited to get started practicing his cursive and finished these beginning pages quickly! 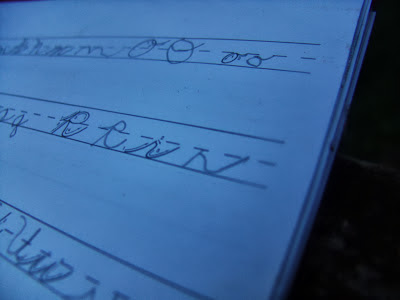 Then onto the lessons. The next lessons go through the alphabet. Each begin with a row of the letter, then one of the words from a verse beginning with that letter for practice. 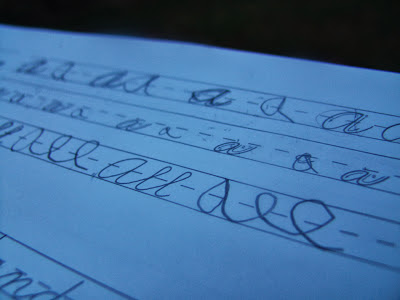 I would usually have him stop here the first day and work on the verse the next day. Sometimes for two days if the verse was longer! 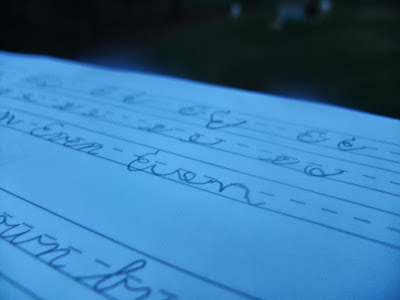 Along with each lesson is the opportunity for drawing. This was his favorite part! 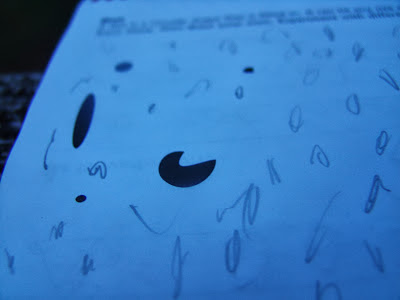 We used this as a supplement to help encourage his cursive skills. I showed the notebook to a friend when she was over and she made a comment about how difficult the letters looked to form compared to other programs out there. I personally didn't see too much struggle from my six year old simply because I wasn't terrible strict. He still needs to work on slanting his letters and is still learning some of the letters for the first time. Really, as long as he has the basic idea, I'm not worried. Yes, I want him to be disciplined but I also want him to continue to enjoy cursive. As long as he becomes comfortable with joining the letters together, knows how to do the curves, etc, I think he is headed in the right direction! Cursive is not being taught in the public schools in my area anymore so I view it more as an art form than anything else. I have noticed that since I have taught him this basics of cursive he is aware of it and can read where I wonder if it would be a struggle if I never exposed him to it!