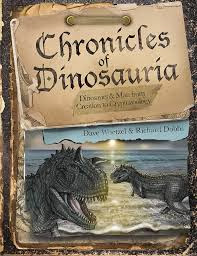 Here's a little secret you might not know about me, (I hope you're sitting down). One of my goals in life. Is. To see a real, living, dinosaur. There, I said it. The nerdy me is out. I truly want to see a living, breathing, dino before I depart this wonderful world. No, I'm not going weird sci-fy girl on you. Bear with me, and please, let me explain, dinos do indeed exist, and have existed alongside man from the beginning of time. Now, I know many of your minds are racing, whether you are an evolutionist or old earth creationist, (meaning you believe that each day of creation was not a literal 24 hr day but millions of years passed between each day of creation). I know you may disagree with me. But I ask you to think. Is it possible? Is it truly possible that men and dinosaurs ever did exist together even though we have been told otherwise for all these years? I believe the answer is, yes!

Sitting in my second grade, public school class I eagerly raised my hand. "Teacher? How do we know that dinosaurs were actually called "dinosaurs" if they lived so long ago?" After laughing hysterically, my teacher calmed herself down enough to answer an obviously confused little girl, "Heather, it's not like the dinosaurs were talking to one another saying, hey we're dinosaurs." Silly question, yes, from an evolutionistic standpoint.  But now that I am a new earth creationist, I look back at that "silly' question and now ask, "Is it possible that dinosaurs and men lived together and what did those who saw dinosaurs call them?" Think about it. If dinosaurs and man did coexist, they obviously wouldn't have used the term dinosaur in their historical accounts. If we did read a historical account and saw that term, let me tell you, we probably would agree that yes, they did coexist. But, simply because historians don't use a word that wasn't invented until 1841, we cannot rule out other words to mean the exact same thing.

So if it is true. That men and dinosaurs roamed the earth together as clearly stated in the Bible, then what were these creatures called? Chronicles of Dinosaura by Dave Woetzel is an excellent resource for children answering such questions by exploring historical dragon sightings, biblical references to dinosaurs and more.

As a homeschooling mom, I am always trying to seek out resources for my children to teach them what the Bible says about dinosaurs, rather than teaching what is so commonplace in the school textbooks. This book is a great resource presenting the evidence of men and dinosaurs, coexisting in a "scrapbook" presentation that is easy to understand. Some of the material I was familiar with in my recent years of exploring the creationist viewpoint. Yet, having the information all in one book, in a format presented in way that even children can understand, is an excellent resource to have on hand! I am excited to have this a part of our homeschool library now! There were also some interesting points brought out in this book that I had never thought about before such as the "fiery serpent" that Moses lifted up on the rod. I always assumed this to be a snake but the author has a different viewpoint on this event which I found quite intriguing.


This book provides evidence of men and dinosaurs through:

This beautifully illustrated 84-page book is not one of those books that you can sit down and read in one sitting. It is a resource book and there is just too much to take in. Each page is jam packed with information that needs to be digested, discussed, and thought about. The author has a creative way about him and he himself has traveled all over the world in search, of yes, my dream, to see a real, live dinosaur! You can find out more about his adventures at Genesis Park.

Disclaimer: I received a free copy of this book in exchange for this review.
All opinions stated are my own.
Posted by Thrift Schooling at Sunday, September 22, 2013