For those of us who grew up attending public school, we most likely remember receiving a weekly reader to take home to inform us on current events. I remember receiving mine on Fridays to take home and read over the weekend! Sometimes, as homeschool parents we want to be able to recreate things that we remember from our educational past, but if our worldview has changed since then, we want to make sure what we are allowing our kid's to read line up with our beliefs! God's World News is a biblically based magazine providing children from Pre-K through High School with current events and fun facts appropriate for their age level. What a perfect substitute for the secular counterpart! As soon as I learned of this company I knew I wanted to try it out in our homeschool! I was excited to receive several copies of the Early Edition geared towards first and second graders and look forward to receiving a full year subscription.

$28 for a Year Subscription
for Level of Your Choice

A yearly subscription includes monthly magazines physically delivered right to your door each month, except May and December. As a subscriber you also receive access to their website which includes the articles in the magazine and other goodies and fun stuff for your child to enjoy!

The Early Edition Subscription Includes not only 10 magazines, but a large map. 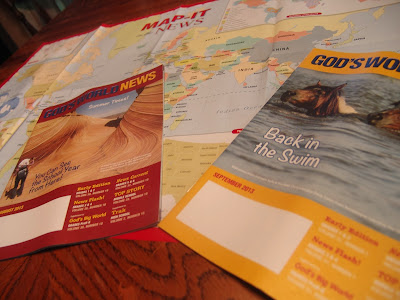 My boys were excited to receive the map and want to have it hanging in the room! I love that even at such a young age they have a desire to learn about the world. To explore other cultures and find out about what is going on in other places outside of their home town. It seems with the Internet, Skype and other means of communication it is easier for children to receive an awareness of the world around them than when I was growing up. I remember being very self-absorbed and thinking that my way, the American way, the New York way, was the best way. The first time I went overseas at the age of 12 I was still so caught up with being "an American" that I wasn't able to truly appreciate the new culture that I was visiting. What a treasure it is to be able to teach our children about what is happening around the world, in a way that makes it real to them. What I love about God's World News is that the news stories are current. Major happenings are brought up and taught in a way that children can understand and in a biblical manner. They also throw in some fun facts that are inspiring for kids such as an eleven year old attending college, or a young girl as a Chess champion. My son loves to play chess so stories like these capture his attention! 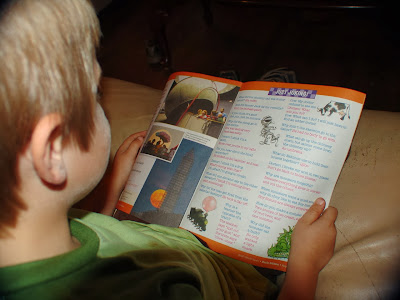 What captures our attention in the secular news? Well, the media seems to think it's sin that we want to read about, and unfortunately many are drawn to just that. Recently the headlines on certain news sites that I would frequent such as Yahoo News, would disgust me. It seemed the more grotesque the sin, the more likely people would be willing to click on it, so an article was written about it. It would be completely irrelevant to what was truly important but it is what people want to read about, sadly. I ended up deleting my account from them because I couldn't get away from their tabloid-based headlines no matter how many times I tried to change my settings! I looked around for a good source of Christian news and hadn't found anything, so I basically would rely on my husband telling me what was going on since I don't watch TV news either.

Well, to my surprise, a magazine called World Magazine is also put out by the same company, and I received a copy of this magazine as well! I am truly impressed by not only the content but the quality of the articles written!

As many of us know most of the common news sources out there have a tainted view and an agenda they are trying to push. I saw this firsthand while staying in Israel. I was sitting in the living room watching the news telling the world what was happening in our area, yet I was experiencing something completely different. I saw things that were never mentioned in the news. A parent came up to me with a child that had been blinded from an attack begging for the world to know her story, yet these instances were being ignored. It was then that I realized that we need to discern for ourselves, as Christians what is truly going on in this world around us. If we can get the mind of Christ concerning current events, then we can know how to pray and we can truly move mountains!