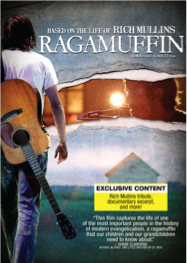 A new documentary based on the life of Rich Mullins, Ragamuffin is now available on DVD! Personally, I have fond memories of Rich Mullins and his music particularly in the early nineties. When I think of his most popular song, AWESOME GOD, I am immediately taken back to the basement of my childhood church where I would spend many Sunday evenings singing "when he rolled up His sleeves, He ain't just putting on the ritz, our God is an Awesome God!" With acoustic guitar in hand and overhead projector lighting up the wall with the lyrics, our youth group of about 30-40 young folks would sing along with our youth pastor. He would then exhort saying how our God truly is Awesome and we shouldn't use that term lightly, since God indeed is the only One that can truly be proclaimed as Awesome!
Fast forward five years, I had found myself a college graduate who had experienced a whirlwind adventure throughout that season in every sense of the term. Relatable music was hard to find at that point. One album that I did find solace in was The Jesus Record put out by the Ragamuffin Band 10 months after Rich Mullin's death in 1997. This album in particular spoke to me, especially the song, My Deliverer, which actually had the voice of Rich Mullins on it that he had recorded in an abandoned church before his death. I would hear the words to this song, "My deliverer is  coming, my deliverer is standing by" and would not only be humbled but try to put life into perspective, remembering the fact that tomorrow is promised to no one!
The movie Ragamuffin shares about the strengths and weaknesses of Rich Mullins, a Christian recording artist. The film is rated PG-13 since the weaknesses are in fact shared, in some pretty strong detail. Rich Mullins was known for being real, honest and transparent before his audience. This movie portrays that the primary pain that he held was from a broken relationship with his father. You will witness swearing, anger, smoking and alcohol abuse in this movie. The swearing was primarily his father and only in a few scenes but the drinking and smoking is throughout the majority of the movie.
I went into the movie curious. This iconic figure in Christianity, what was he like? Well, he wasn't perfect. Are any of us? This movie shows how God has a plan for any and everyone and will use them no matter how messed up their life may be. While watching the film, it was clear that the struggles that Rich faced were rooted deep in the pain from his broken relationship with his father. I kept watching the movie thinking, that the main sin in life is not the drinking or the smoking but the unforgiveness that one holds inside. The Bible says that God will only forgive you as much as you forgive (Matthew 6:14). Unforgiveness is dangerous territory and can lead anyone astray. I kept watching the movie, not distressed so much by Rich's struggles with alcohol or smoking but more so with the unforgiveness. I kept waiting and hoping that it would be dealt with and he would come to peace with how his father had treated him, and according to the movie, he did, (in quite an interesting way, too).
Even though I know that some of the greatest of the great Bible heroes fell into sin, such as King David and Moses, I also know that our God has the power to change people. This movie kind of gave the impression that it's okay to be a sinner and stay a sinner and God still loves you. Even though you did see a change of heart towards his dad (which is huge!) you never really saw him stop living in his sinful ways. He certainly had a gift and a call of God on his life but we have to remember that the gifts and callings are without repentance (Romans 11:29). I think the message of the gospel is yes, Jesus loves us, but He loves us so much not to leave us where we are but to take us out!

This man certainly touched my life and many others and his life surely is a testimony that God is bigger than us and our shortcomings, I just think the movie may have focused a bit too much on his sin rather than who he really was as a Christian.
Interesting Fact About Rich Mullins
Did you know that he took a vow of poverty and only took the amount of money from his fame and fortune that he needed to survive? The rest he gave to charity. He never knew how much he really made.
Check it Out For Yourself!
You might be interested in seeing what it was like for someone in the Christian music industry. The genuine struggles of having a call of God and dealing with the pulls of the power and fame that can come with it.
Enter To Win a Copy!
Enter the Rafflecopter Below to Receive a Copy of Your Own!
a Rafflecopter giveaway


"Disclosure (in accordance with the FTC’s 16 CFR, Part 255: “Guides Concerning the Use of Endorsements and Testimonials in Advertising”): Many thanks to Propeller Consulting, LLC for providing this prize for the giveaway. Choice of winners and opinions are 100% my own and NOT influenced by monetary compensation. I did receive a sample of the product in exchange for this review and post.
Only one entrant per mailing address, per giveaway. If you have won the same prize on another blog, you are not eligible to win it again. Winner is subject to eligibility verification.”
Posted by Thrift Schooling at Monday, July 07, 2014

Big Ragamuffin fan here. I'd love to see this.

One of my favorite concert memories was back in 1993 (or 4) when I saw Rich and the band in Dallas. The end of the concert was a time of worship songs which we all sang along to. I had my eyes closed and was ready to go to the next song when nothing happened. I opened my eyes and there was NO one on stage! They had quietly walked off, no applause or adulation sought. That's probably one of my fave Rich Mullins memories.

My hubby and I still enjoy his songs. As a matter of fact, at the beginning of your review when you mentioned "Awesome God," "My Deliverer" started running thru my head!

I am not real familiar with Mr. Mullins, but this sounds like an interesting movie, and I would like to see it!

I remember the day Rich died, equally vivid in my mind as the day the Challenger exploded. I was in college at ISU, really close to where his car accident happened. It really shook up my friends and I. All of us were big fans. We still listen to his music often and talk about him with our kids. In fact, we named our oldest Aidan, partly from Rich's song "Let Mercy Lead." I can't wait to see this movie!

My wife and I have wanted to see this movie since it came out but there was no theatre in our area that showed it. We loved Rich's music.

My friend Bethany and I went to see a screening of the movie this Spring. I'd love a copy to watch again & share w/ other friends!

I'd love to watch this DVD as it sounds inspiration with a powerful message at the same time.

I'd like to win because I love Rich Mullins' music.

I love his music but haven't heard of this DVD before. And I absolutely love documentaries! So this would be great to have!

I would love to win this movie to watch with my husband and teens.

I've always loved his music and when I saw this film was coming out definitely wanted to know more about his life.

Fan of his music and love watching documentaries!

I am a fan of his music and want to know more about his life.

I want to win this as I love his music. It is so uplifting.
Laurie Emerson
lauraemerson17 at yahoo dot com

I would like to watch a good wholesome movie (I was just traumatized by the newest Planet of the Apes movies).Thank you

I want to win this for my nephew.

I would like to win as I am a huge fan of his music!

I would love to win this for my brother.

I would like to win this because I've heard great amazing things about this film and as a great believer of god living inside of a person, I feel I could appreciate the content and enjoy it over and over again!

I have seen this movie and was so touched by it.Gave me a lot of inspiration.I would like to share it with my family members.

I want to win because it sounds like a very inspirational DVD.