Be prepared for a powerful, life-changing experience when you watch Lt. Col. Dave Grossman's 5-disc DVD series, The Bulletproof Mind. For a limited time only you can order this set for only $97 (retail $297). 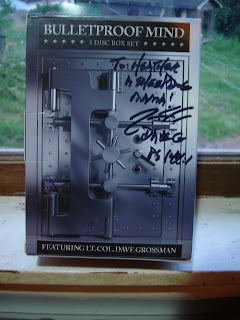 It's no secret that mass killings, right here in America, are on the rise. While driving through town, it seems that flags are constantly at half mast, a continual reminder to pray for the families of these heartbreaking tragedies. The most recent incidents that immediately come to my mind are Texas, Florida, and California. Did you forget about California? It has been a little over six months since this terrible event.


Look at these faces. A loving father of six, a hardworking, kind, mom who was married to her High School sweetheart. We see a brother who was the youngest of thirteen siblings and a daughter who brought her family nothing but joy. On December 2, 2015 each one of these precious lives were taken by the hand of terrorists. Six months later have we forgotten what has happened? Terrorists are in our country, trying to kill us. How are we handling this? How are we reacting when tragedy hits? Are these events moving us to action, to fear or placing us in denial?

Now that I have four children of my own, the thought of protecting them has been on the forefront of my mind. To prepare, I began watching  the  The Bulletproof Mind, in DVD form, with Lt. Col. Dave Grossman. I had no idea what I was in for. Col. Grossman, is widely known for his book, On Killing, which is required reading for those in the Marines. Between the time that I watched these videos and now, more mass killings occurred. One of which was yet another terrorist attack. In response to these events, I am confident that we do not need to make stricter laws concerning gun control but rather we need to see more responsible armed citizens.

Col. Grossman has a message that I believe all Americans need to hear and take to heart. He was an Army Ranger and taught Psychology at West Point. He also helped aid in counseling after the Columbine massacre in Littleton, Colorodo as well as many other tragic events. My eyes were opened through his powerful, informative and heartfelt message.

This five DVD set has changed the way I think about certain realities that we are facing. For example, what are all the headlines saying concerning the recent murder of the police officers? They are calling the killer a shooter. I appreciate how Col. Grossman makes it clear that shooters, in and of themselves, are not the enemy. Murderers are. Killers are. Sociopaths are. The word shooter should be reserved for the responsible gun owners in our country who go to the range or hunt during deer season. There is nothing wrong with shooting, the problem is when the weapons get into the wrong hands.


1- The Threat To Our Children

3- It's Worse Than It Looks

5- After The Smoke Clears


Since this is a family-friendly blog, I do need to share with you that there is course language in these videos. I do not recommend watching with your children or in a church setting.


The Bulletproof Mind from Travis Wears on Vimeo.


The training that you can receive as a parent in these videos is powerful. Even though I am not used to the harsh language I still fully stand behind Col. Grossman's message and the heart of what he wants to share with you, the American citizen.

What I am really excited about though are two children's books that share one of the most powerful points in his videos, the concept of the sheepdog. Col. Grossman has collaborated with Stephanie Rogish to write Sheepdogs: Meet Our Nations Warriors and Why Does Mommy Carry A Gun? stay tuned later this week as I share these important resources with you!


Disclaimer: I received the product mentioned in exchange for my honest opinion.