Nexabiotic is a powerful probiotic formulated with 23 probiotics that help develop a healthy gut, which is key to your overall health. 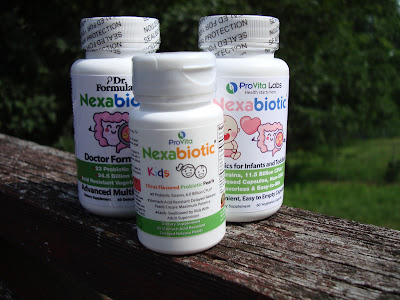 Our bodies should have a healthy, normal, balance of probiotics naturally but, because of the food we eat, our bodies are simply out of wack. Not only is this because much of the food presented to us is void of nutrition but also because of the antibiotics that are pumped into them. Personally, I am not a fan of antibiotics and rarely use them on my own accord.
Unfortunately, during my last pregnancy, I had several issues that led me to the decision to finally cave in and go on antibiotics. Big mistake. My body has been completely messed up this past year and I believe that the few weeks of antibiotics had a large role to play in all of this.

The problem with antibiotics is, that it not only kills the bad bacteria in your body but the good as well. If all the good bacteria is killed off then not only is the target area affected but your whole body can be affected too. Over the past year I tried three different types of probiotics in hopes that things would get back to normal and Nexabiotic has balanced things out the most of these three. The main issues I was having were UTI's and yeast infections. It was a constant, continuous issue since the day my baby was born. Ten months and piles of probiotics later, no hope. Thankfully, the strands found in these probiotics is exactly what my body needed and I have seen a significant change and these issues are no longer plaguing me! 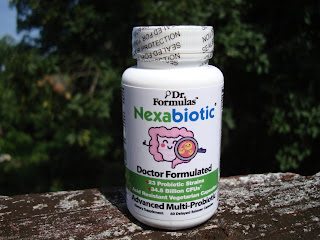 Another benefit that I have noticed in using these probiotics is the increased energy that I have. I do not consume caffeine and am fine without it but when I take these probiotics I feel as though I just had an entire pot of coffee. I wake up wide eyed and ready to face the day. My house has never been cleaner. Seriously, I have so much more energy in the mornings. The only negative effect that I have seen is that I do get the same crash that I used to get midday when I was on caffeine. When I am not on the probiotics I don't need a nap midday but when I am on them, I have noticed that I am exhausted in the afternoons. Hopefully this will even out in time because these are the best probiotics that I have tried. Honestly, the benefits outweigh any of the negative effects any day. It is recommended that you take the probiotics twice a day. I started off slow with once and have gradually added in my second dosage. When I first started it I noticed some headaches but from experience with other probiotics I knew this was normal. After a few days the headaches stopped and I began noticing increased energy.

Nexabiotic also provides capsules for infants and toddlers. These capsules are extremely easy to use. You simply twist open the capsule and pour into your child's bottle or mix in with their food. My baby didn't seem to know that I was sneaking the probiotics into his bottle. It didn't compromise the taste or flavor at all because he would finish his bottle without any complaint. It is suggested to give it to them once a day. 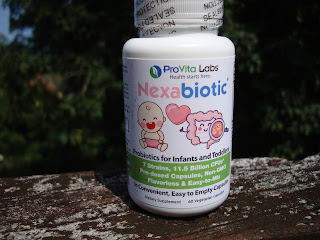 In addition to the adult and infant capsules, I also had my children try the kid's capsules. Fortunately these are chewable since my kids have a hard time swallowing capsules. They are small, flavorful and easy to get down. My daughter loves the flavor and always wants to have more than one a day. To her it's like candy. My oldest son was not a fan but he hates anything medicine or vitamin related anyways. But, it's not to the point where he'll refuse to take them, he just makes sure to let me know he is not enjoying it. My middle son is pretty nonchalant about it. If I ask him to take it, he'll comply. 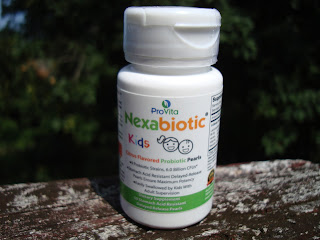 Overall, I am pleased with the results of Nexabiotic and plan on purchasing more of this specific probiotic when my bottle runs out, which is saying a lot because I didn't do that with the other ones that I have tried!

Disclaimer: This post is brought to you by Brandbacker and Nexabiotic. All opinions stated here are my own.
Posted by Thrift Schooling at Friday, August 19, 2016