I recently received a one-year subscription to Kids Email Safe Email for Kids which is a safe, spam-free email service provided by Kids Email. My intention for trying out this service was to see if there really could be an email service out there that kids could use safely.

When the Internet first appeared on the scene in the 90's, parents were scared. And rightly so. Even though we had a computer in our home, it was for one, in a communal location and two, did not have the Internet. The Internet was new and up and coming and many parents, including mine were concerned about allowing it in their home. I was a teen at the time and it wasn't until I was in college that we did have Internet access in our home. When I look back to when the Internet was introduced and different neighbors in my neighborhood and relatives in my family started getting it, I can remember the exact location where each family kept their computer. Because, yes, there was only one computer per home. They were expensive and a big deal. Not everybody had one. The computers were usually set up in a corner in the living room or a home office so if one person was on it, others were usually around. Obviously, nowadays, kids and adults alike can access the Internet from any room of the house, in the car, in the middle of the woods and on one of many devices available. The prices of computers, tablets and phones continue to become more and more affordable so even the most frugal of families can afford to get online. (I just bought a $35 Raspberry Pi 3 for my kids to do school work on- talk about cheap!!) But, with the rise of increased online access, how do we as parents respond?

I know that I am thankful that computers have come a long way. Remember when pop-up ads were at their peak? I mean, if you did not have a Mac, you were done for. I am not talking about side-bar ads but actual pop-ups that you had to manually close but in the process most likely clicked, even if you didn't want to. Then you were taken to a not-so-pleasant site. I am thankful I don't have to worry about that threat towards my children but that is not to say there is not still click bait out there. Case in point. Email.

Here is a recent screenshot from my spam folder from my personal Gmail account.

Notice the Lonely Asian Girls, Jessica 27 and Veronica. And these are on the mild side. We all know and have received much, much worse ones that would tempt young kids if they saw it. And, I've noticed that male email accounts usually get the brunt of the unmentionable stuff. So how do we protect our children, especially our sons? Well, I set up an account with Kids Email for my eleven year old son to see how it would pan out.

I could choose to have him have a kid themed interface or teen. I opted for teen since it had a clean, simple, more mature look. Also, the email address ends in kmail.com, which is a bit more enticing for older kids than kidsemail.com. 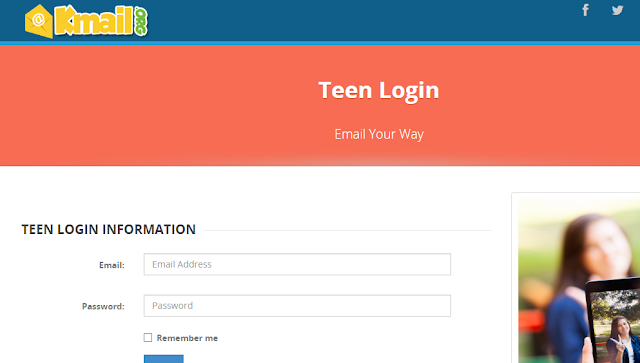 There are several reasons why I would want my child to have an email account. One, if he has online work to do, he can send the info to me via email, which is what we did. Second, if he wants to communicate with relatives and send them pictures or thank you messages for gifts then that is another great way to do it. Also, there was a certain App that each one of my family members wants an account for to learn a foreign language, but you need a different email address to do so for each person. Having a separate email is perfect for this.

Fortunately, parents can track and monitor all account activity.

I can see every time he logs in, sends an email or receives one. I can adjust the settings so he can only receive emails from the people in his contacts and I can choose to let him manage his contact list or have it set up where only I can. The settings are completely in my hands. I can decide if he can receive and open images, links or certain emails from certain people. I even put it to the test and signed up his email on a website to see if their correspondence would be blocked. It was. Which made me happy that random spam would not be entering his account.

Overall, I did not have any problems with Kids Email and would recommend it to anyone looking for a safe email solution for their kids.