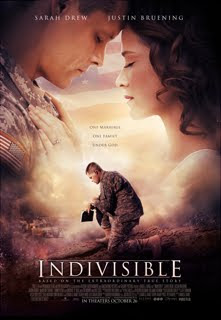 INDIVISIBLE is based on the extraordinary true story of Army Chaplain Darren Turner and his wife Heather. With a strong, faith-filled marriage, the Turners are ready to follow their calling: serving God, family, and country.

Fresh from seminary and basic training, Chaplain Turner and his family arrive at Fort Stewart. Yet before the Turners can even unpack their new house, Darren is deployed to Iraq. Heather is left taking care of their three young children alone as well as serving the families of the other deployed soldiers.
Despite a desire to stay connected with their loved ones, the harsh realities of war take a daily toll over the course of the Battalion’s extended deployment. Meanwhile back home, babies are born, kids keep growing, and nerves are frayed with every late-night knock on the door.
With deeply etched battle scars, the soldiers’ long-awaited homecoming is much different than any of their families anticipated. Carrying burdens the other can’t comprehend, the Turners must decide if they’re willing to face one more battle: the fight to save their marriage.
From the director of The Grace Card and the studio that brought you Fireproof and War Room comes INDIVISIBLE, the story of one marriage, one family, under God. My Thoughts The actor and actress that they cast for the main characters, Darren and Heather were spot on. They were likable and the chemistry was great between the two! I have to say that the storyline was intense. At first I thought that this movie might not work since the war in Iraq is still fresh in so many minds. For example, I personally have no desire to watch a movie or documentary about 9/11 because even after all this time, it stirs up too many emotions. This is why it crossed my mind that this could also be the case with Indivisible. Even my husband, who was deployed to Iraq for a year (before we were married) had no desire to watch this movie because, "I already lived it." He watched it anyway. And, "it wasn't terrible," were his exact words. I think people who wonder what the war was like and those who have already experienced it could gain something from this film. For me, one who wonders about what my husband experienced on the other side of the world, this movie was an eye-opener. And, for my husband, he appreciated the faith aspect portrayed in this film. The only part that we were not fans of was the constant push of a coin that Darren kept with him and passed out to others in Iraq. Though an important part of the story, the way it was presented was overkill. They made it seem like there was going to be an advertisement at the end of the movie trying to sell the coin which made something that was most likely powerful in real life just seem cheesy. Overall, I highly recommend this movie if you are looking for a good Christian movie to watch!
In theaters beginning October 26, the movie stars Sarah Drew, Justin Bruening, Jason
George, Tia Mowry, and Madeline Carroll. See if it will be playing in a theater near you:
http://indivisiblemovie.com ENTER TO WIN TWO TICKETS!! Enter the Rafflecopter below for a chance to win two Fandago codes good for the Indivisible movie! a Rafflecopter giveaway
Only one entrant per mailing address, per giveaway.  If you have won a prize from our sponsor Propeller/FlyBy Promotions in the last 30 days on the same blog, you are not eligible to win.  Or if you have won the same prize on another blog, you are not eligible to win it again.  Winner is subject to eligibility verification.


Disclosure (in accordance with the FTC’s 16 CFR, Part 255:  “Guides Concerning the Use of Endorsements and Testimonials in Advertising”):  Many thanks to Propeller Consulting, LLC for providing this prize for the giveaway.  Choice of winners and opinions are 100% my own and NOT influenced by monetary compensation.  I did receive a sample of the product in exchange for this review and post.