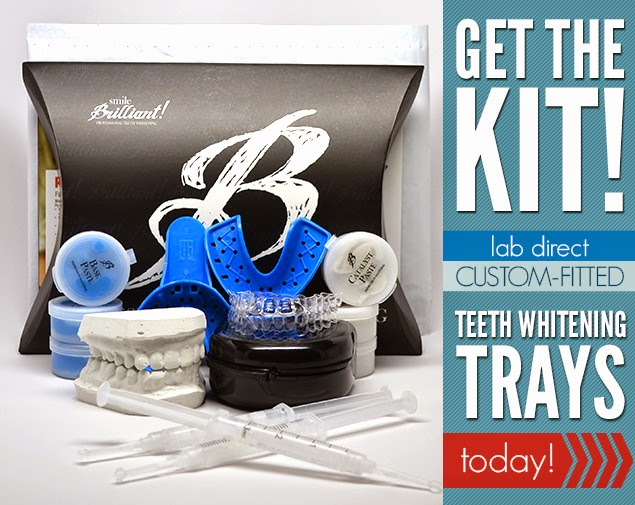 $129.95
FREE Shipping
{Giveaway at Bottom of Post}
SmileBrilliant! was created by Betty Shah, a 30 year veteran in the dental industry. Realizing that much of the cost and time associated with professional teeth whitening revolved around trips to the dentist, Betty began experimenting with a system to allow customers to make dental impressions themselves!

In less than a year, she perfected the product and was working with some of the world’s leading manufacturers of professional strength whitening gel.

With the support of her sons and close friends, she began delivering product and creating trays from a make-shift lab in her home basement.

It was not long before the world took notice. Many people who saw meager results from over-the-counter products began searching for better results. For most people, the $500+ price tag of custom-fitted trays from a local cosmetic dentist was simply too much.

SmileBrilliant! began to take off as fashion/beauty writers reviewed the product and customers told their friends. Over the past 2 years, SmileBrilliant! has grown to service thousands of customers worldwide.

The safest, most effective means of removing stains from your teeth is with the use of hydrogen peroxide (HP) or carbamide peroxide (CP). It’s not to say there are zero risks associated with the two but the HP and CP risks are temporary and are limited to tooth sensitivity and gum irritation. Personally, I have super sensitive gums so this product is not for me. I have always had sensitive gums from childhood, primarily from not flossing well. (So floss kids, floss!)

Hydrogen peroxide generally is only used by dentists because the dentist can control the distribution of the gel using “dental dams” and cheek protractors which holds the hydrogen peroxide on the tooth and prevents it from coming in contact with the gums.

It is estimated that tooth sensitivity will occur in 66% of all teeth whitening users (I'm included in that count); however for the vast majority the severity will be very mild.

Cause: Even though there are at least a dozen causes of tooth sensitivity, there’s really only one thing going on: the inside of your tooth is getting exposed to the harshness of the
outside world. In this scenario it is hydrogen peroxide or carbamide peroxide.

Teeth are mostly made up of dentin, which itself is filled with little tubules rife with sensitive nerve endings. Normally, these tubules in the dentin are blocked off by enamel, a protective layer on the outside of every tooth. Dentin hypersensitivity kicks in when we have receding gum lines, grind, decay or have thin or cracked enamel, exposing our teeth’s delicate insides.

What About Those Other Teeth Whitening Products I've Tried?

Whitening Tooth Pastes and Mouth Washes typically do NOT contain hydrogen peroxide and even if it did it would not be very effective because in order for it to remove the stains from the surface and within the tooth it would need to maintain contact with the tooth for a minimum of 45 minutes. Another downfall to whitening tooth paste is it usually contains abrasive material that wears down then enamel. Enamel cannot be restored and will result in increased tooth sensitivity.

Whitening Strips will remove all surface stains from the tooth it comes in contact with over time; however strips are not adequate for combating those stains found in the crevices where the teeth adjoin (especially when the teeth are not perfectly straight). Strips are also NOT effective around the gum lines, nor do they reach the molars.

In-office Power Bleaching with a laser is considered the most efficient means of whitening your teeth. Can't afford it? Try SmileBrilliant!

Custom fitted teeth whitening trays are without argument the most effective means of whitening/bleaching teeth because they hold the gel to the surface of the tooth, crevices, and gum lines for hours without interruption.

1) Last for years: maintaining stain free teeth can cost as little as $20 a year.

2) Ensures all stains on the entire tooth (molars, crevices, and gum lines included) are removed.

3) Treatments can be applied while sleeping.

4) Results will be the same as in office power bleaching with laser
Tooth sensitivity solution available.

5) More effective than strips and in the long run there is a cost savings.

How To Order A Custom Tray

2} Easy step-by-step instructions walk you through the process of making your own impressions.

3} Return dental impressions to the SmileBrilliant! lab using the pre-paid/pre-addressed envelope provided with the kit.

4} Using your dental impressions, a SmileBrilliant! Lab Technician will create an exact model of your teeth.

5} The model is then used to fabricate custom-fitted teeth whitening trays. These trays are returned to you in as little as 3-5 days.

SmileBrilliant! has a 100% money back guarantee if you are not satisfied.

Enter the Rafflecopter Below To Win Your Own
Custom Fitted Trays