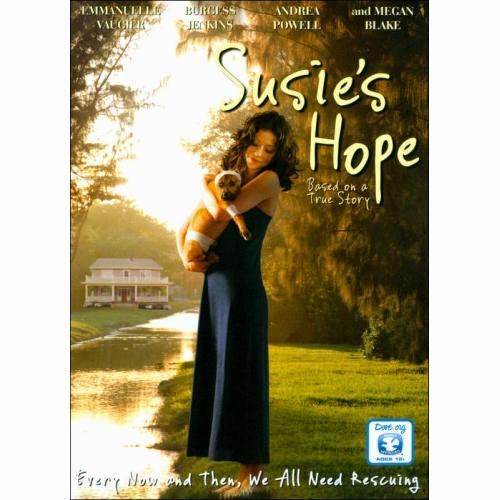 THE MOVIE
Based on the true story, Susie’s Hope brings to life the inspirational relationship between pit bull attack survivor Donna Lawrence and Susie, a pit bull-mix puppy found beaten, burned and left for dead. Recognizing that neglect and abuse were to blame for the tragic attack that nearly claimed her life 10 months earlier, Donna resumes the battered animal and accepts her as family. Together, they learn to heal, love and forgive as they lead a historic effort to seek justice and protection, not only for Susie, but all animals. Starring Emmanuelle Vaguier, Burgess Jenkins (Remember The Titans) and Andrea Powell (Ender’s Game), Susie’s Hope is an incredible story of love, loss and redemption.

THE STORY BEHIND THE MOVIE
Susie was found nearly dead in Greenfield Park in Greensboro, North Carolina on August 20, 2009. Just a puppy, Susie had licked the face of her owner’s newborn baby. Her owner became violent—she was beaten so severely her jaw was broken. That wasn’t enough, though. She was then set on fire and left for dead. Incredibly and against all odds Susie survived. Donna Lawrence adopted her two months later. Susie is now a trained therapy dog and event won the American Humane Association’s American Hero Dog this year.

MY THOUGHTS
This is a movie for animal lovers, no doubt! Anyone who has a heart and passion to see animals taken care of and justice brought to them, this movie is for them! The story truly is emotional and sad but the movie brings in some humor and lightheartedness. It is sad, not only what happened to the dog, but the pain and suffering that Donna Lawrence experienced. The pain she went through would be hard for anyone and I could see how going through the event of passing stricter laws in her state and bringing the issue of abuse to the light through this movie was likely a healing experience for her. Although I appreciate and believe it is important to respect our animals, I didn't personally agree with the push for stricter laws against animal abuse. I agree that it is sad,and wrong but having a paw print on a law just doesn't sit right with me. With that said, I know that this story could bring hope to people who have experienced suffering in their lives due to an animal attack. This woman's story of hope and forgiveness could be an inspiration to many!

WIN A COPY
Enter the Rafflecopter below to receive your own copy of the DVD, Susie's Hope.

"Disclosure (in accordance with the FTC’s 16 CFR, Part 255: “Guides Concerning the Use of Endorsements and Testimonials in Advertising”): Many thanks to Propeller Consulting, LLC for providing this prize for the giveaway. Choice of winners and opinions are 100% my own and NOT influenced by monetary compensation. I did receive a sample of the product in exchange for this review and post.
Only one entrant per mailing address, per giveaway. If you have won the same prize on another blog, you are not eligible to win it again. Winner is subject to eligibility verification.”

I loved the message of this inspiring movie, and would love to share it with my friends and family.
Melissa
@puppyfit

It seems like a sad movie with hopefully a very happy ending. I love animal movies

I really enjoy movies about animals