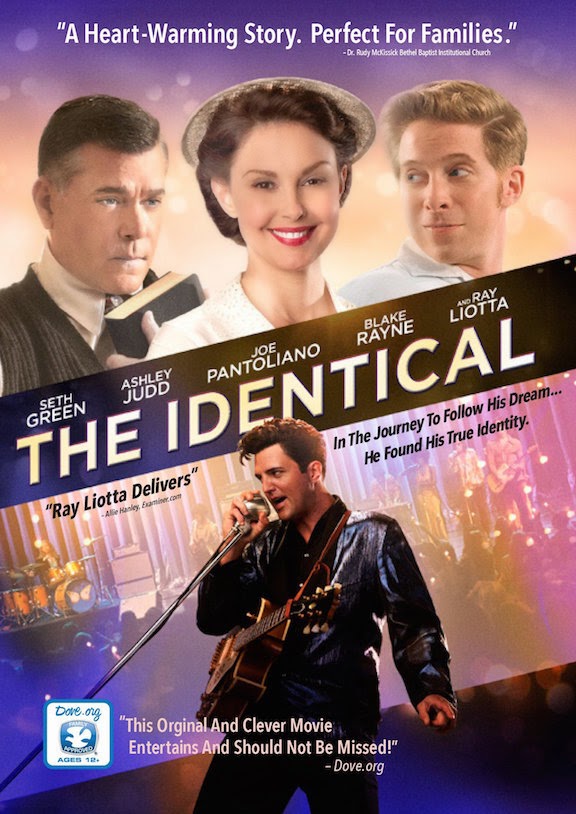 The Identical starring Ray Liotta, Ashley Judd, Seth Green, and Blake Rayne is a redemptive movie about a young man, the son of a preacher, who rejects his father’s desire for him to join the ministry and instead embarks on a career as a rock singer. As he struggles to pursue his dream and rise to stardom, he finds love, pain, success, failure and ultimately uncovers a hidden family secret that reveals who he really is.
Isn't it hilarious that I reviewed a movie like this? If you know me personally then your jaw has probably dropped to the floor. Okay. You can pick it up now! Listen, I will say this, I do have a very strong opinion about rock music and whether I think anybody is ever led by God to pursue it as a career. Because quite frankly, I don't. With that said, I went into watching this movie thinking the storyline was going to be completely different. I don't want to ruin the ending for you so I won't go into details but I will say this movie was not what I was expecting.

I know though that rock music, both secular and "Christian," is an avenue that many people believe is their calling in life. And, I'm sure they have had much criticism from people like me and the pastor in this movie! So, if that is you, then you will indeed be able to relate to this movie. It's an interesting film with plenty of plot twists and turns that will keep you wondering what is going to happen next, for sure!

Curious about this movie? Check it out for yourself by entering below to win a copy!

The DVD that I am giving away contains over 85 minutes of bonus content including “Making The Identical,” Behind the Scenes, and Deleted Scenes!


"Disclosure (in accordance with the FTC’s 16 CFR, Part 255: “Guides Concerning the Use of Endorsements and Testimonials in Advertising”): Many thanks to Propeller Consulting, LLC for providing this prize for the giveaway. Choice of winners and opinions are 100% my own and NOT influenced by monetary compensation. I did receive a sample of the product in exchange for this review and post.
Only one entrant per mailing address, per giveaway. If you have won the same prize on another blog, you are not eligible to win it again. Winner is subject to eligibility verification.”
Posted by Thrift Schooling at Sunday, January 11, 2015

It sounds like a story that I would enjoy

I want to win this movie so I can actually watch a movie with my grandchildren.

It's a movie I can relate to. My daughter wants me to see this.

wanna win for my gf! - regnod(at)yahoo(d0t)com

I want to win this movie because I like Christian movies and this sounds like it is one. I haven't seen a good movie in a while so this would be very nice to win.

I want to win, it looks good! Plus, something I could watch with hubby.

This sounds more like real life and not some off the wall, reality.

I have heard a lot about this movie and am very interested in watching it. Thank you

I think it looks like a great movie with an excellent cast!

I want to see this movie because it sounds interesting with plenty of twists.

I love watching faith based movies and would enjoy watching this one with my family.

This sounds like a good date night movie. I think my hubby & I would both enjoy it. :-)

i would love to win this movie because it would be a good movie the whole family could watch together.

I love music and I love movies. This has music and looks like a great movie.

Because I like the story line and I'm a fan of Ray Liotta.